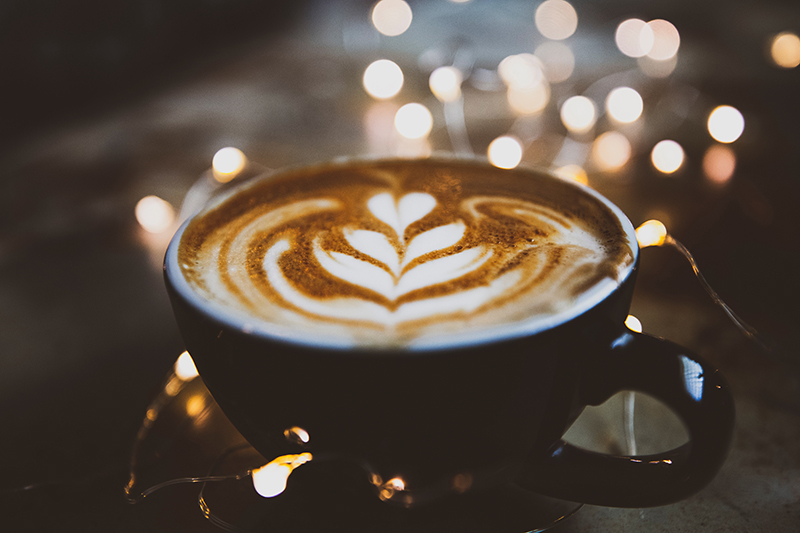 Don’t you sometimes wish for a milk foam mustache to form on your lips while drinking cappuccino and your loved one to wipe it off of your lips?

Call me childish but I really love how the cappuccino foam forms a mustache over my lips; looks cute and funny. Though we love the foam mustache, spending money on a cafe-served coffee just for the foam mustache isn’t a great idea.

Most of us think that instead of spending our time making coffee, it is easier to get to the coffee shop and buy coffee. I agree that a cup of coffee does not cost a fortune, but it also does not take a decade to make coffee at home.

If you ask me, I would rather make my own coffee with lots of milk froth made in my own kitchen. Homemade coffee —be it cappuccino or latte—has its own pleasure and satisfaction.

I’ve been talking about coffee only, yet it does not mean that milk frother is beneficial for coffee drinkers only. Have you tried hot chocolate with a thick layer of frothed milk?

I’m confident that the hot chocolate with frothed milk on top will melt your heart. You wouldn’t look for whipped cream anymore.

Things you should know before getting a milk frother

If you’re wondering how does a milk frother works then here is the answer. A milk frother uses aeration and speed to froth the milk. The milk frother adds air to the milk and then mixes the air throughout the milk making it foamy. Hence giving a silky-smooth texture.

Using a milk frother is easy and does not take much of your time. I’m a coffee lover, however, I don’t like my coffee flat. What I mean to say is I like my coffee with lots of foam in it which is why I like cappuccino. The foam really makes coffee taste different than the regular coffee. Don’t you think so?

The use of milk froth is not only limited to coffee, there are so many cocktail recipes that has foam in it. So if you are into such drinks, then a milk frother suits you as well.

With a milk frother at home, it becomes easy to make your favorite latte, cappuccino, mochas or any other drink that requires foam. You wouldn’t have to spend money every time you want something foamy.

The first type which is a Manual Milk Frother is actually very cheap compared to the second type. But it requires more effort and time than the automatic milk frother. In the meantime, people also believe that frothing milk with the use of manual milk frother increases the quality of froth.

These are simple, easy-to-use and cheap. Such milk frother has a motor and a whisk. The motorized whisk is inserted in the milk, turned on, the whisk starts spinning and makes foam out of the milk. They are mostly battery-operated gadgets.

Stand-alone milk frothers are different than handheld milk frothers. It can froth as well as warm milk at the same time. They are little expensive than the handheld ones.

Some of this type of frothers have temperature control feature while some of them doesn’t. Below are the two best stand-alone milk frothers.

Here are my 5 Best Milk Frothers which are perfect for the job and are very reasonably priced because we don’t want to put money on something that is not worthy. 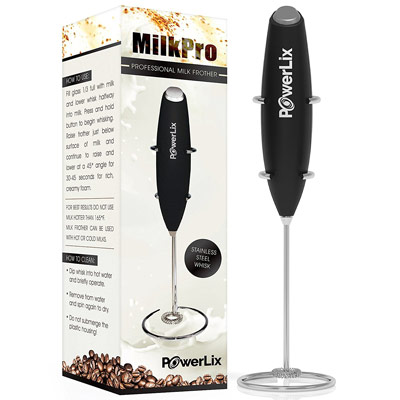 When I was looking for a milk foamer I wanted something that would work fast yet give a creamy milk froth. In that process, I found this milk frother.

The time it takes to froth milk is very impressive. Within 20 seconds of time, it can make enough froth for lattes or cappuccino.

One of the many reasons behind choosing this device is that this is a battery operated handheld milk frother. It has no cord and does not need electricity but you’d need two AA batteries.

I can take it anywhere with me and make myself a foamy cappuccino without getting messy. All I would need to do is put some milk in a cup, plunge the frother into the cup and power it on. Few seconds of mix and the milk froth would be ready.

Not only that, I also like how this device is designed. The sleek black handle fits right into my hand and can use it comfortably. It is very easy to handle and is very lightweight. This milk frother comes with a stand which has made storing easier and makes your kitchen counter look neat as well.

It is very easy to use, but I don’t like how I’d have to keep pressing the power button while I use it. And for me, it is the only drawback of this milk frother. It would have been better if only it had an on/off switch. Otherwise, it is the best milk frother within its price range.

Not only frothing milk, I can also use it to mix soups, fruit drinks, milkshakes and other liquids. Despite having a powerful motor, it does not make a loud noise which is a plus point as we don’t want to disturb anyone early in the morning. 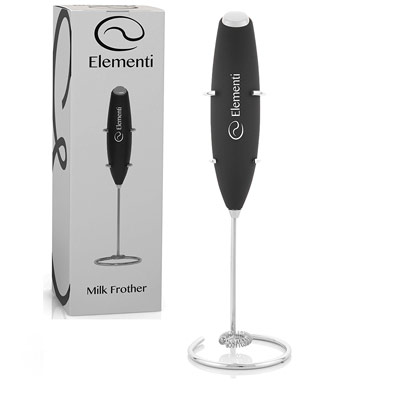 This is without a doubt, one of the best handheld milk frothers that you can find in the market. It is stylish, easy to use and looks sleek. And it is very affordable. It is a battery operated handheld frother and requires two AA batteries.

It is a small device but has great working capabilities. The powerful high-speed motor makes is fast enough to froth milk within 45 seconds, which also means you’d have to hold the frother about 45 seconds.

The advantage of a small sized milk frother is the storage. It can easily fit into small spaces in the kitchen cabinets. It does not require huge space. Even if you decide to place it on the countertop, it won’t look bad because of its sleek and beautiful design.

Like other handheld frothers, this frother also has a stand. When it comes to a handheld frother, the whisk is always a thing that worries us. The whisk is made of stainless steel so it durable and strong. But still, it is best to take care of the whisk. With the help of the stand, the frother can be stored safely and the whisk does not get bent or broken.

Cleaning it is easier than using it. It only takes seconds, all it needs is a rinse of whisk in hot water. The ergonomic design makes it comfortable to hold and use. It is perfect for making coffee, latte, macchiatos and many more drinks right at home. 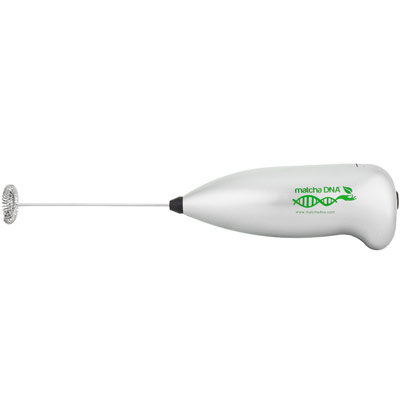 I’ve always wanted something that is easy and convenient to use. In the process of looking for something like that, I found this handheld milk frother.

The very first thing I like about this milk frother is its ergonomic designed handle. The steel shaft of this milk frother is stainless steel and is BPA free. The handle is made of plastic. It is small and is a lightweight device. Because of its small size, it can be stored in the kitchen drawer or can fit in a small space of your kitchen cabinet.

Despite its small size, it is powerful and does its job amazingly. Within a few seconds, it turns the milk into smooth milk froth. If you are wondering if this device is only for regular milk then let me tell you that it can be used for any type of milk—almond milk, soy milk, coconut milk and other milk. 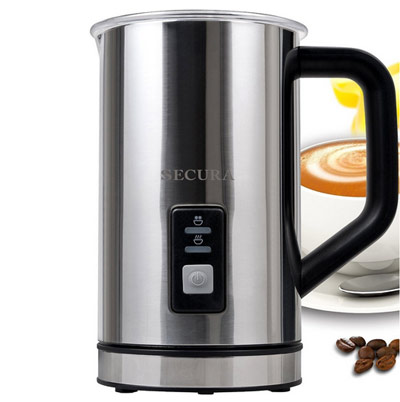 This milk frother is a little different from the above-mentioned product. It is a jug type milk frother, needs electricity to operate and can also heat milk. I like the fact that this milk frother can not only froth milk but can also heat it. However, it only heats about 250 ml of milk, which means you’d only be able to make a cup of latte at a time.

Since it is mainly a milk frother, how much milk it can hold for frothing is more important. It holds about 150 ml of milk for frothing. This machine has 2 level marks which have made it easier for me to put the right amount of milk in the jar. I don’t have to measure the amount of milk I use every time. I can directly pour the milk into the jar.

The base of this machine is detachable and it comes with a cleaning brush. For safety, this machine should not be used when the milk level is under the minimum level mark.

I also like how I can use both hot or cold milk to froth because some milk frothers only work either with hot milk or cold. No matter what milk I use, almond milk or regular milk or any other milk, it gives thick froth which is just what I like.

It looks simple yet elegant because of the stainless steel used. There is an on/off button on the bottom of the jar and also it has two light indicators above the power button. These indicators indicate if the frother is on frother mode or milk warmer mode. 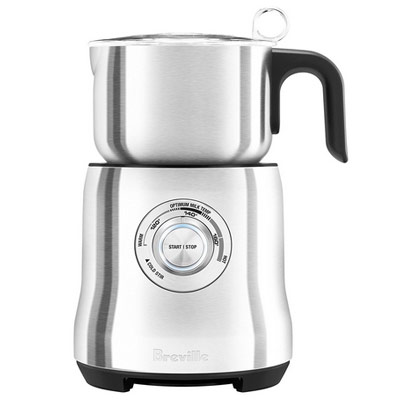 Here comes my personal favorite milk frother. When I first found this frother, I wasn’t sure if this is the frother I want. But let me tell you, this is the perfect device if you’re a coffee lover or you like a lot of froth on your drink like I do.

Pricewise it is obviously an expensive milk frother than the other frothers on my list, but if you look at the things it does and can do, it is worth the price. This milk frother does not only look different but is different in every aspect of the common milk frother.

This frother works on induction heating which distributes even heat on the base of the pitcher and heats the milk nicely. It is capable of heating 3 cups of milk at a time which is a lot when compared to other milk frothers that can actually warm milk.

It really is an impressive device. When you’re using this device you wouldn’t have to constantly keep eyes on the frother as the frother can shut off automatically. This feature makes it better than other milk frothers found in the market.

It is perfect for making cappuccino, latte, and hot chocolate. Just add the ingredients directly to the milk through the opening on the lid. To make less confusion about the quantity of the milk it can froth or warm at a time, the pitcher has marking on the inside. It has different markings for cappuccino and latte.

If you want to experience a silky smooth and consistent milk frothing, I recommend this milk frother. It is pricier than other milk frothing devices, but it also provides features which are not available on other devices.

In the end, the decision is yours. The above-mentioned milk frothers are some of the best milk frothers that you can get in the market. But still, there are many other frothers which are different than the frothers I’ve chosen. I hope you’ll get the one you like the most.

Let us know which milk frother you ended up with.

Please subscribe to our newsletter to get the latest news in your domain of interest. Don't forget to follow us on social networks!

Which Space Heater Should You Choose for the Large Room?